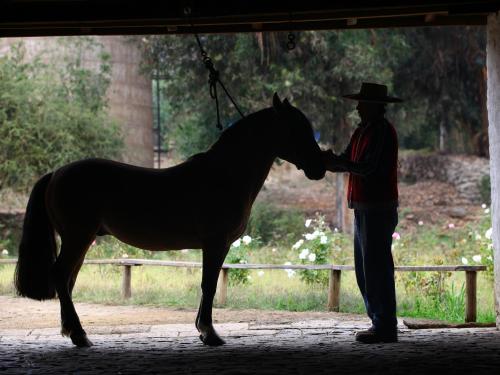 Going into Hacienda Los Lingues® is like going back in time. It is not only a typical house of the Chilean countryside, but a living testimony of what was the time of the Colony. Everything remains as it was: the buildings are made of mud and straw; the walls are painted in colonial red and each remodeling is done by historians to preserve the original architecture.

The trees adorn the patios and parks. Among boldos, quillayes, hawthorns, eucalyptus, lingues® and holm oaks grow the typical birds of the area, such as ducks, quails, pigeons, foxes, chillas, etc.

The origins of the Hacienda date back to the end of the 16th century. At that time he settled in the Valley of Santiago, Don Melchor Jufré del Águila, Hidalgo Extremadura, son of a knight of the Military Order of Santiago, who served as Mayor of the capital in 1599. As a writer and successful chronicler, It gained prestige in the Santiago society and was graced by the King of Spain with the Estancia de la Angostura, located in the Central Valley.

What will later be called "Hacienda Los Lingues®", is inherited years later by his daughter Doña Ana María del Águila, wife of the Governor of Chile, Don Diego González Montero (1662-1670). Both are ancestors of the hero of the independence of Chile, Don José Gregorio Argomedo and Montero del Águila, who was born there in 1767. Since then Los Lingues has belonged uninterruptedly to his descendants, generation after generation. In this way he has managed to stay more than four centuries in the same family.

The current owner of Los Lingues®, Mr. Germán Claro Lira, has restored the old houses of the Hacienda, both in its exterior architecture and interior decoration, presenting them as they were at the time of its original construction. In this task, he has been advised by architects and historians who have guided him in his purpose, respecting the characteristics of the rural houses of the central valley in the Hispanic colonial period, and at the same time, being faithful to the transformations they experienced as a result of the independence.
This has been achieved by exhibiting a living testimony of the past, which allows us to better understand the historical reality of what was a typical Chilean agricultural property.

Their employers' houses, for example, were built between 1690 and 1700 by the Argomedo family. The house holds a succession of surprises. Some doors were manufactured by the famous "Bavaro Jesuits of Calera de Tango", of which works are preserved in the Palacio de la Moneda and the Cathedral of Santiago.

The basement, with thick walls of "lime and stone" -the same material that served for the legendary bridge over the Mapocho River, is transformed into huge winter dining rooms, capable of hosting hundreds of diners.

The employer's houses occupy an area of ​​more than five thousand square meters. Many of its jewels are still preserved: ornaments, fine silverware, glassware, game tables, lamps. Each object has its history: some belonged to illustrious figures of Chilean life such as Mateo de Toro and Zambrano, Conde de la Conquista, who presided over the First Government Junta; there are memories of Gaspar Marín; José Gregorio Argomedo; Ramón Freire and José Victorino Lastarria, among others. It highlights a Florentine Christ of the seventeenth century, made in ivory with 72 cm. high, which belonged to Pope Pius IX, who today is in the Chapel of the Treasury.