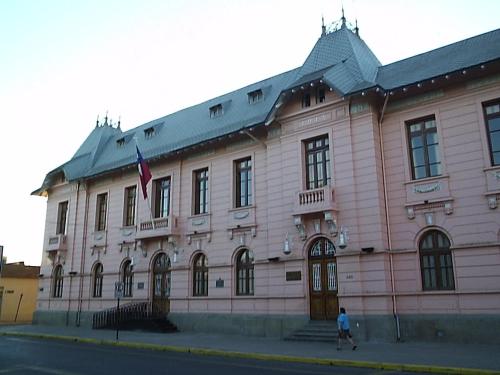 In the 18th century, the Governor of the Kingdom of Chile, Don José Antonio Manso de Velasco , proposed the task of creating villas to attract the floating population and expand the idea of ​​enlightenment, for which he sent the landowners the entire length territory an extensive memorial, requesting the necessary territories for the convenient ends. Don Juan José Jiménez de León and Hurtado de Mendoza, who donated the pasture of " Las Chacras " with more than 450 blocks belonging to the Estancia " Lircunlauta ". 2 On May 17, 1742 the Governor arrived in the area and made an acknowledgment of the place, choosing the place where the Plaza de Armas should be established, the success of the new town would be to attract Spaniards , vagrants and vagabonds to thus start the process of domestication and proletization of the floating population that at that time did not want to enter the economic system of latifundios (haciendas and estancias). This type of population lived in the surroundings of the Colchagua ranch.

On May 17, 1742 , José Antonio Manso de Velasco , later named Viceroy of Peru, founded San Fernando de Tinguiririca, which was recorded in the signed act in the town of Malloa, taking advantage of the 450 blocks they had donated to the Spanish Crown, the neighbors don Juan José Jiménez and his spouse Mrs. María Morales de Albornoz.

This also began the allocation of land and lots to more than three hundred people, considering the following demarcations: La Cañada, to the north, today Av. Manso de Velasco; Juan Jiménez street, on the west; the railway line for the east and the callejón de los Palacios, for the south, currently calle Los Palacios. In this type of trapeze, 91 blocks or blocks were drawn, some subdivided into four lots, separated by rectilinear routes, 13 bars wide.

The lands were humid and swampy, due to the presence of the rivers that surrounded them, the Tinguririca and the Antivero. It was necessary to apply drastic measures, fines and prison sentences, so that people began to settle in their lots and begin the construction of their houses. It corresponded to the corregidor Mr. Pedro Gisbert and Talens, to make such a decision to carry out the settlement of the Colchagua Valley.

Throughout the republican life, the life of this city reached special notoriety, especially from the installation of several industries that gave it great vitality, such as the tobacco factory (subsidiary of the British American Tobacco), of matches and several tanneries, among others. In addition, the installation of the Liceo de Hombres, in 1846, as well as the Escuela Superior de Niños, were also factors of progress, which allowed the inhabitants to develop a rich intellectual life, with choirs, literary groups, artistic evenings and lectures until late in the year. twentieth century. Among the newspapers that disseminated these activities, one can tell El Guerrillero (1956-1972), and among the most active intellectuals, Juan Danús .

San Fernando has a temperate-warm climate with prolonged dry season (5 to 6 months). The temperatures of the coldest month are lower than 12 ° C and higher than 2 ° C but in winter the minimum temperatures can be lower than 0 degrees. While in summer temperatures can exceed 30 degrees. Out of this condition there are 4 to 5 months with sufficient humidity. The average annual temperature is 14 ° C; the warmest month is January with 20 ° C; the coldest is July with 7.1 ° C. The annual thermal amplitude is 11.9 ° C. The absolute minimum in the city is 5 degrees below zero, but in some areas of the commune (higher), temperatures are lower.

Founded in October 1744 , when a group of eight Jesuit missionaries arrived to raise their mission house two blocks southeast of the Plaza de Armas, which now houses a small parish church. After the earthquake of February 27, 2010, the church was in poor condition so it was closed to the community, waiting for a restoration.
Declared a National Monument, by Decree N ° 936, of November 16, 1984 of the Ministry of Education of the Republic of Chile.

Monument to Manuel Rodríguez
In honor of the guerrilla and patriot Manuel Rodríguez Erdoíza, who was the first authority of the city and fought for the independence of Chile. This adorns the square, was installed in 1910. In that same place the patriots who fought for independence were hanged. Many stories revolve around this monument, one of them is the tunnel that crosses it from the San Francisco Church, to the front, to the Lircunlauta house museum.

Pool of the Plaza de Armas
It was acquired in France and placed in the Plaza de Armas of San Fernando in 1870. For a long time it was held that the beautiful pool was brought as a trophy from Peru after the war of 1879. Originally the pool built in Paris, was intended for the Plaza de Concepción. It was brought by rail to San Fernando, where the line of FF.CC. But the Intendant of Colchagua, got this monument to stay there.